A quick check on this blog reveals that I haven’t written anything in eleven months.  That is far too long and kind of sad.  After all, this was my flagship blog.   I even transferred it from one platform to another.

The subject of today’s blog is the train shop.  I visited George’s Trains today for the first time in over a year.  And, well, things seem a bit off.  I couldn’t quite put my finger on it, but I knew something just wasn’t quite the same.

They’ve moved some products around.  The N scale stuff that I was interested in had moved and there were far fewer pieces around.  The HO scale stuff was still pretty abundant, but there did seem to be a bit less of it.  They still had a huge selection of magazines and books for sale, but it just seemed like there was less.

I also noticed that the prices of stuff had really jumped.  While the engines had always commanded a high price, the rolling stock seemed to be moving in that direction also.  A lot of what I saw was double the price it was five years ago.

I walked around in a bit of dismay.  Is this what the internet has done?  Or is this just the reality of the hobby now?  Are the aging train lovers not being replaced by a new generation?

On Saturday, while walking the rainy streets of St. Catherines in search of a burrito, my friend asked me what I have been doing hobby-wise.  I was at a bit of a loss for an answer.  I seem to have taken a break from my hobbies.

I have spent a lot of time researching stamp collecting; both out of sheer interest and as a way of keeping myself from starting a new hobby.  Knowledge, and especially knowledge of both cost and how deep you can become involved in a hobby often seem to quench the fire the new hobbies burn at.  I can’t say I have quenched the fire yet, but I have come to realize that stamp collecting is a very large (deep?  consuming?)  hobby that perhaps only model trains can compare to.  Once you make that leap….

I could say that blogging is my hobby, but how many blogs would you want to read about blogging.

I am preparing for a trip, and the preparation for the trip is taking up a lot of my time (and if I am being honest, money).  I blame myself because I put off preparing for this trip because I was dealing with a medical issue. (see my other blog to find out more about my journey from Thailand to Vietnam via Cambodia by bicycle).

I visited a train store with a friend, and all it made me do was realize how backed up I am with my train hobby.  I’ve got so much to do that it all seems so daunting.

I would take up ballroom dancing, but I don’t have a partner.

I played darts last weekend after a long hiatus.  The results were good, but it wasn’t exciting.

My friend gave some advice about building models.  Just see one through to completion and it will change your perspective on everything.  This is certainly sound advice.  It’s exactly the kind of advice I would have given him if he had told me that he was in a hobby rut.  It’s funny how we can give advice, but only to others.

For all the other model hobbyists about there, how do you get out of a hobby rut?

I was out at the Skydome (I still find it hard to call it the Rogers Centre)  to watch the Toronto Blue Jays pound on the Seattle Mariners.  Why walking to the stadium through the skywalk–a convoluted path that is convenient but poorly marked-I had a chance to snap some pictures.  I hope you enjoy. 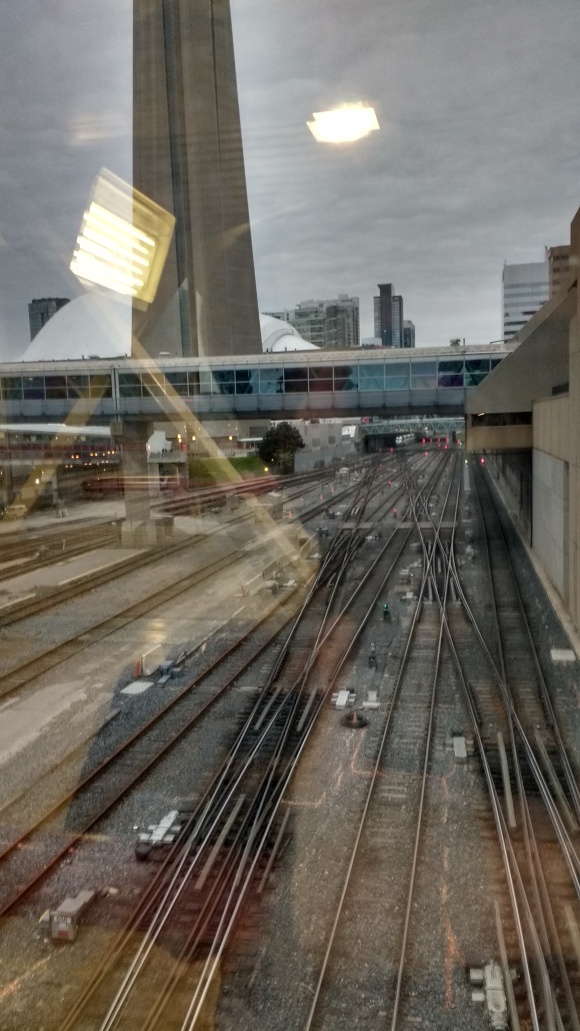 My recent trip to Vietnam was fantastic.  If you want to see more pictures, please check out my main blog (link somewhere on the left hand side of this blog.

During the trip, I had the chance to see some interesting trains and I thought I should share them on this website.

The first is the original steam train the French used to go from Saigon to Da Lat when they wanted to escape the summer heat.  Based on the fact that it was over thirty degrees at the end of February in Saigon, I think that was a great idea.  Also, since Da Lat is a coffee producing region, have trains to carry the coffee beans was also a pretty good idea. 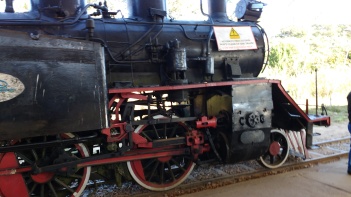 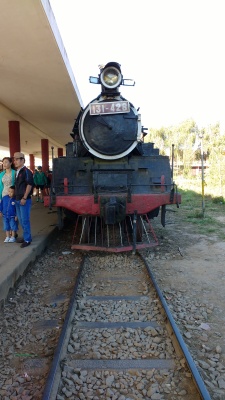 The second is  of the commuter train we took from Hue to Hanoi.  It left about 5:30 and we traveled until 5:30 in the morning.  I have a video, but I am unable to upload it to here.  When I have it uploaded to YouTube, I will put a link here.

While in Toronto to watch a baseball game–Go Jays!! I came across a Via Train and the UPX….or is that UP express.

I suppose it is supposed to stand for Union to Pearson express:  Union obviously being a train station and Pearson being the name of the International Airport in Toronto. 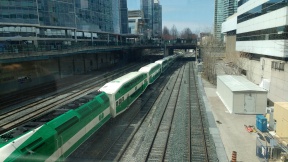 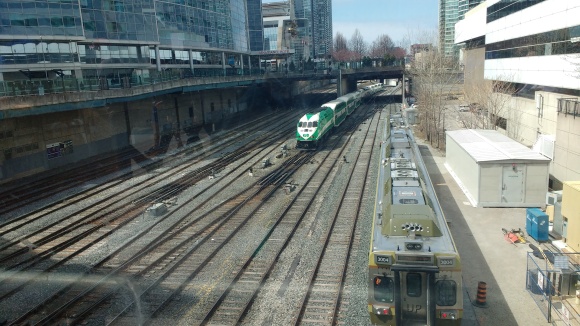 Either way, based on the reaction in previous posts, I thought you might like these pictures.  I am sorry I didn`t shoot any video.

Trains are awesome.  Trains are great.  My town has a renovated, yet classic train station, yet only commuter trains run on it.  That doesn’t bother me, but it isn’t the same as seeing freight trains every day.

I went out for a walk today and took some photos.  Anyone interested in trains might appreciate them. 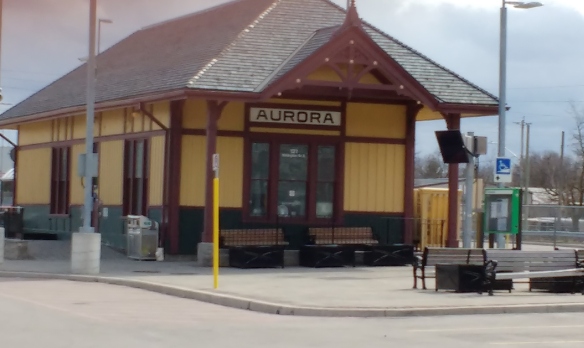 Even the bicycle parking is cute.

I haven’t written much about hobbies lately because there really hasn’t been much time to devote to hobbies. That’s probably not one hundred percent true, but that’s how it feels.  It hasn’t stopped me from thinking about my hobbies.

On YouTube, I have seen two things that always struck me as interesting, but not overly applicable to me. The first was a subscription service for Japanese candy.  You pay a fee every month and they send you candy from Japan.  The second was those “lucky bags” in Japan where, depending on the store, you pay a price and get a mystery bag of stuff that is supposed to be worth more than you paid.  This is a once a year deal in Japan, but the idea sounds interesting enough.

In some cases, the stuff you would get would probably be things that didn’t sell well, or were over produced. Still, it might be interesting.

So far, the one that I have found to be the most interesting is one that introduces a new hobby to you every month. It seems kind of interesting, but I could imagine that I won’t like every hobby.  I know I love a lot of hobbies….but I know there are ones that are not really interesting.

What I would like to see are subscription boxes in the following areas:

If anyone subscribes to a hobby based subscription box, I would love to hear from you. I am curious and I want to know more.  Also, any positive or negative feedback about subscription services would be nice.  If I can’t find what I want, I may have to start one up.

I decided to search if WP to see if there was a topic on his.  I found it under subscription.  I will also look there while waiting for your replies.

My Other Blog: Today's Perfect Moment

How and Why I Upgraded my WP Plan

I’ve Got some Dandelions (in Case you need them)