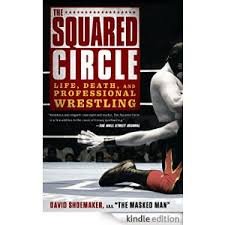 In my life, I have watched a lot of professional wresting. I grant that most of it hasn’t been in this millennium, but in sum total, I have seen a lot. Most recently, I have watched quite a number of “shoot” interviews about wresting that have popped up on YouTube.

Prior to that, I had read a number of books written (or ghost written) by some wrestlers from my youth and early adulthood. I found books like Mick Foley’s to be absorbing and hilarious. It was in that spirit that I decided to read The Squared Circle by David Shoemaker.

Overall, I can only give the book a 50 percent approval rating. I have no complaints about the writing because it was solid. The prose flowed well and there were no obvious clichés or bad puns or nudge nudge wink wink supposedly inside jokes. The real difficulty for me was the content. There were parts that were great, but there were parts that just did nothing for me.

The beginning of the book does a great job explaining how we got from hours long legitimate bouts to the high energy soap operatic sports entertainment of today. This part of the book was fascinating and insightful.

The book also touched on a lot of interesting topics which are only given cursory glances in other books. Things like stereotyping and the use of ethnicity and foreignness as a creator of enemies, racism (not just new to Hulk Hogan) nepotism, women in wrestling, and unionization. The inclusion of these topics, and its critical take on a lot of this, makes those sections of the book exceptional.

The other half of the book is a series of biographies of wrestlers who have died. A morbid topic, but obviously an important and popular one if YouTube view counts are to be believed. These are well written, but not particularly enthralling. Perhaps it is because I have become somewhat numb to this, or because the biographies are too brief and too slight to warrant any enthusiasm. Without any real context for what drove these people to seek their fame in the squared circle, how can I adequately measure the causes of their deaths.

If you are a fan of wrestling (especially from its earlier days) you will enjoy the book, but you will probably go looking for more. If you find it, let me know.

My Other Blog: Today's Perfect Moment

A Chance to Use my Tools